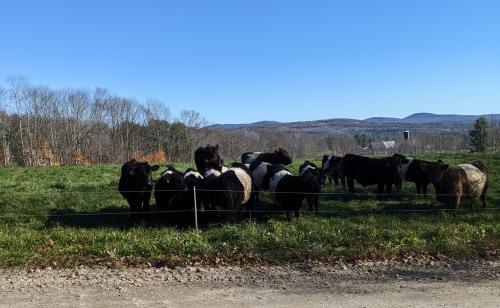 The neighbor farm is raising Belted Galloways as local beef. If you do not know they are black or brown with a white stripe (or belt) around the middle. An old breed that does well in our area and have been made a little famous by the herd down in Rockport that gets their picture taken frequently; the Oreo cookie cows so to speak.  At any rate some of the local ones have been grazing in the field across from the house for the last week or so. They have been great fun to watch, the center of attention and  conversation for all of the neighbors.

They have gradually been moved to the top of the field and are now right across the road from us. For the most part they ignore us as we go about our daily activities but today was different. Our son Nicholas is travelling and left his car with us. It has been parked on the landing below the house for a week or so. I decided that I would take it to Rockland to run a few errands but when I walked down to start it the battery had gone dead. Not a big deal I keep a set of jumper cables in my 4 runner and had that key in my pocket.

I pulled down close enough to connect the cables and got both connected. At which point the car alarm went off. Not a small noise in a quiet corner of the world like ours. I was able to hop into the car with the alarm at full blast and start it shutting off the alarm. Not a big deal I thought.

Then I removed the jumper cables and started for the back of my 4 runner to replace them in the drawer. As I rounded the corner I was greeted by an intensely interested audience waiting to see what would happen next. Not really much to see even for cattle with nothing else to do but sometimes even the most uninteresting things draw a crowd.