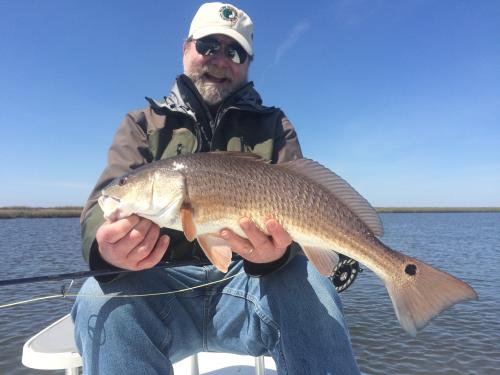 This has been a busy winter; guides association duties have filled more of my days (and evenings) than I would like. Argy has been just as busy but we scheduled a few days together after a conference she was attending in New Orleans. I planned a day of fishing with Captain Lucas Bissett of Low tide Charters. Like many of you I wanted to catch a few fish but really was more interested in seeing the Louisiana marshes and seeing a new place.

The boat ramp was very busy and when we launched I expected to see other fisherman all day which proved to be not the case we were pretty much alone as Lucas poled the flats boat into places I would have never guessed would hold fish. The water while a little cloudy allowed for Lucas (and me after some training) to see fish to cast to. Some were in water so shallow that their backs were out. One we followed for maybe a hundred yards while he swam toward us (I made that cast and even caught the fish).

As you might guess a trip with a couple of guides was a great success even though the redfish were amazingly spooky in the morning we were able to bring several to the boat by the end of the trip. I never really got the hang of the eight foot cast on a nine foot rod but Lucas was polite and we enjoyed a grand day out. I did not catch any of the monster fish that are in these waters although did have a good opportunity at a large black drum. We saw a few dolphins and a couple of nutria both firsts for me. The weather was nearly perfect with just enough breeze but not enough to make casting a fly difficult.

Needless to say Lucas gets my  recommendation and it is a pleasure to see young guides coming into the business that have the right attitude and understanding of customer service. If you are in New Orleans I recommend a day on the water with him.

Argy and I headed north on a road trip through Mississippi and Arkansas, the last two that she needed to have visited every state in the lower forty eight. We had an amazing variety of local foods; think beignets, poboys, barbeque, soul food and, muffalettas; visited a number of towns that never see any tourists and I think gained a good sense of the Mississippi Delta.

It is as always great to be home and look out across the still snow covered hills. At least we visited spring! Which must be coming soon.